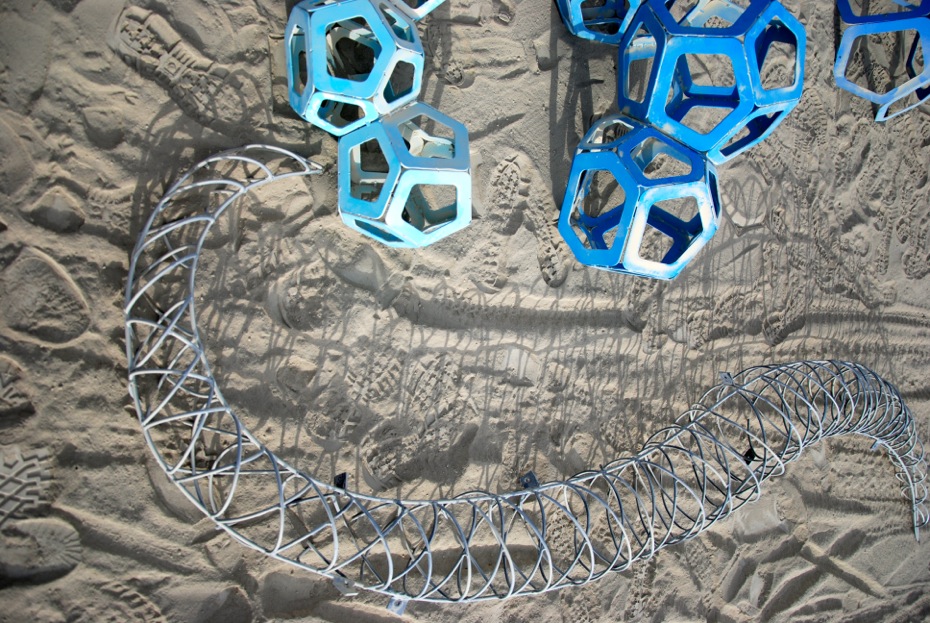 How’s this for a Burning Man story? Reema Farhat is driving through the alkali flats of Western Nevada pulling a trailer in which the disassembled steel and wire components for an 11-foot fire sculpture she plans to unveil at the festival are bumping around behind her like unsecured artillery shells. It is hot as hell. “It was my first time ever driving a trailer, so naturally I drove it too fast and got a flat tire. And of course being so tired from working on my project and being up nights and working HERE during the day, I was so tired I didn’t think about getting a spare for the trailer. I had one for the car, but not for the trailer.” Reema had to unhitch the trailer and drive around desert-rat Nevada looking for a new tire. She found one and drove it back to her abandoned trailer (and art piece) and changed the flat all by herself. She finally pulled into Burning Man at 4 in the morning—“in the middle of a dust storm!”

And you say you want to be an artist?

Reema is a project architect at O+A , often the person responsible for making sure the design is code compliant, architecturally feasible and likely to stand up, but in her spare time she is a sculptor and painter. This year’s was her third trip to Burning Man and the fourth time she has worked on sculptures for the festival. The first three were collaborative architectural projects—“Very large,” she says. “The teams for those projects were between 50 and 100 people. Some of them cost as much as a hundred thousand dollars to build.” 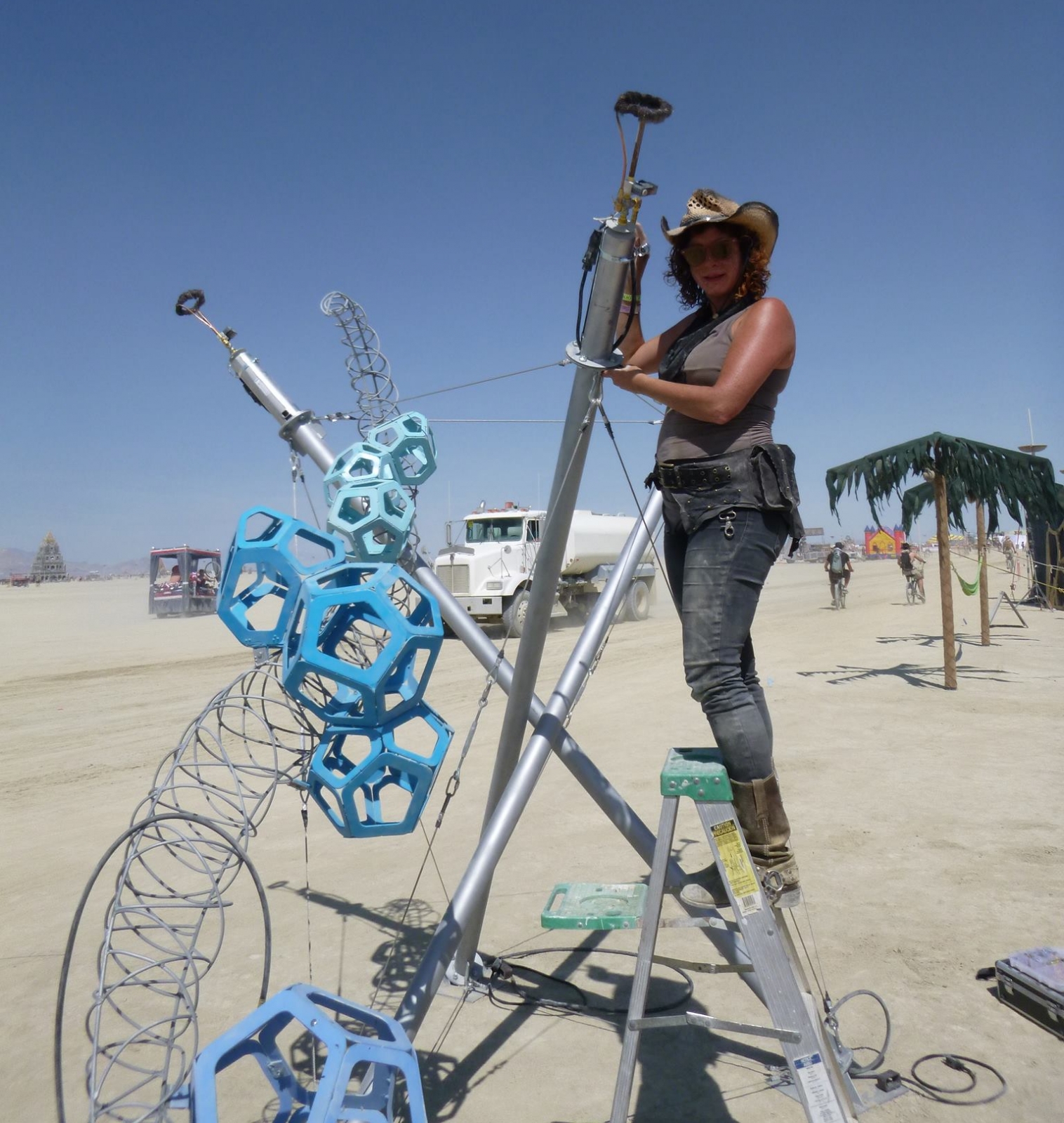 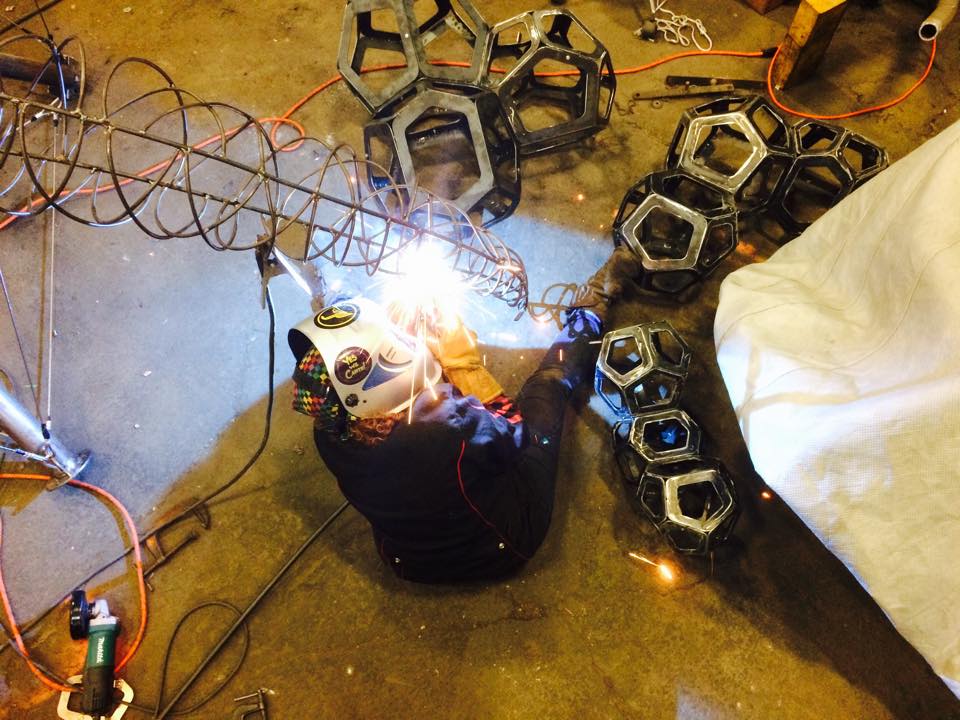 “Architecture is not always as creative as I’d like it to be. So I really love working on the scale where you can do a project that’s spatial, that’s architectural, but purely artistic and really doesn’t have any other function.” 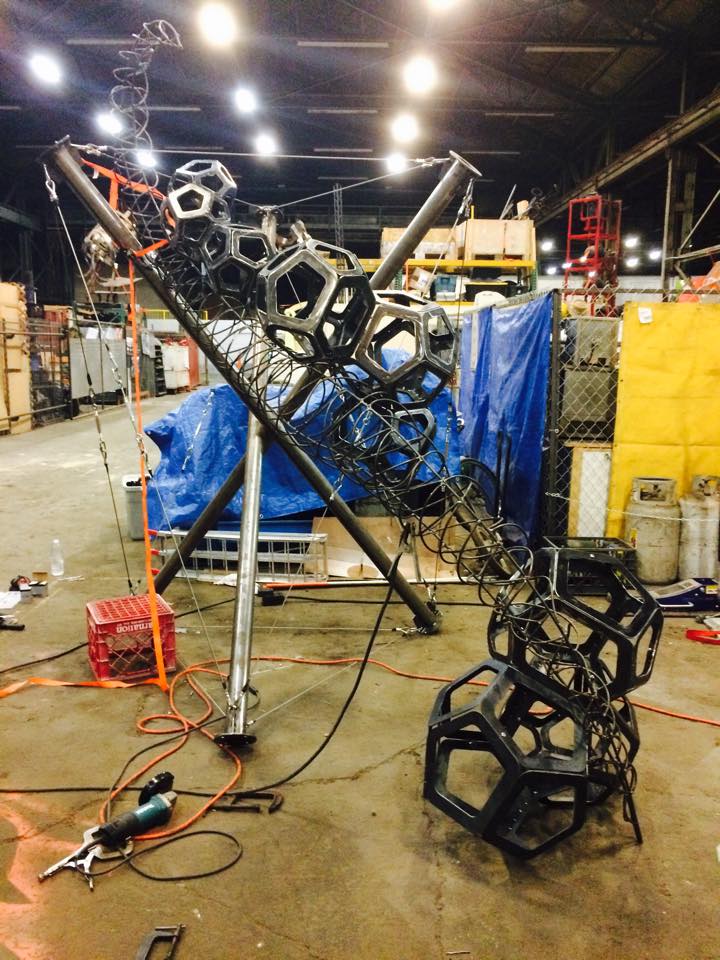 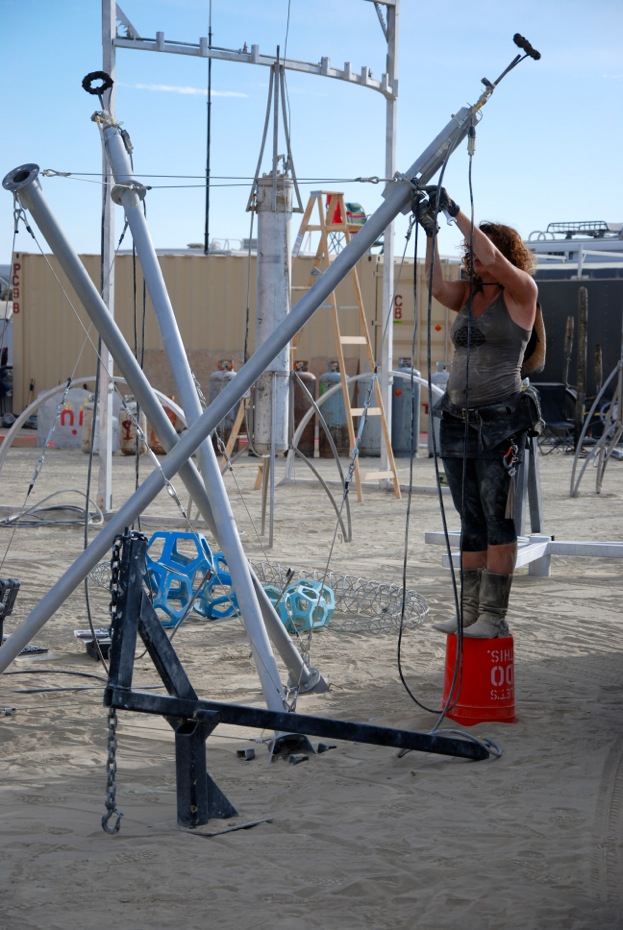 So it was exciting to do a solo piece this year. Inspiration came from her favorite architect Buckminster Fuller and his experiments with tensegrity. Reema wanted to play with that concept: “Tensegrity is basically a structural system where it’s all supported by tension. It’s a very sturdy structural system that’s light-weight and strong so it’s really great for Burning Man because winds there can get up to 70 miles an hour. I wanted to design something that was durable and could withstand that. So I did all these wind calculations and figured out a system that worked.”

“No, I didn’t get that complex. They were like on the back of a napkin.”

She also wanted it to blaze. Reema has worked for years with The Flaming Lotus Girls, a collective of sculptors and fire artists, best known for giant, fire-shooting structures with names like “The Serpent Mother” and “The Angel of the Apocalypse.” Reema credits the women in this group with teaching her how to weld and an offshoot group The Flux Foundation with stoking her passion for large-scale public art. In one sense, then, her solo fire-shooting effort at Burning Man was a kind of graduation piece. Not that anything in Black Rock Desert is ever entirely “solo.”

“Burning Man is a real city,” Reema says. “It’s a city of 60,000 people. And I belong to a theme camp that is about 300 people: Illumination Village. It’s an art camp and it’s one of the oldest theme camps in Burning Man. The people that founded the village are artists—artists that do the big art out on the Playa. So the majority of the people in the camp are already builders and people with a lot of skills. Because my sculpture was a project for this village a lot of the more experienced architects and artists took it upon themselves to mentor me. There were a lot of things that I didn’t know how to do that I learned from these other artists. And there were new people that had never done anything before who were really jazzed to help.”

Reema’s piece then was a perfect expression of the Burning Man ethos—a celebration of individual vision firmly fixed in a context of community. Sort of like architecture. “Architecture is not always as creative as I’d like it to be,” she says. “So I really love working on the scale where you can do a project that’s spatial, that’s architectural, but purely artistic and really doesn’t have any other function.” 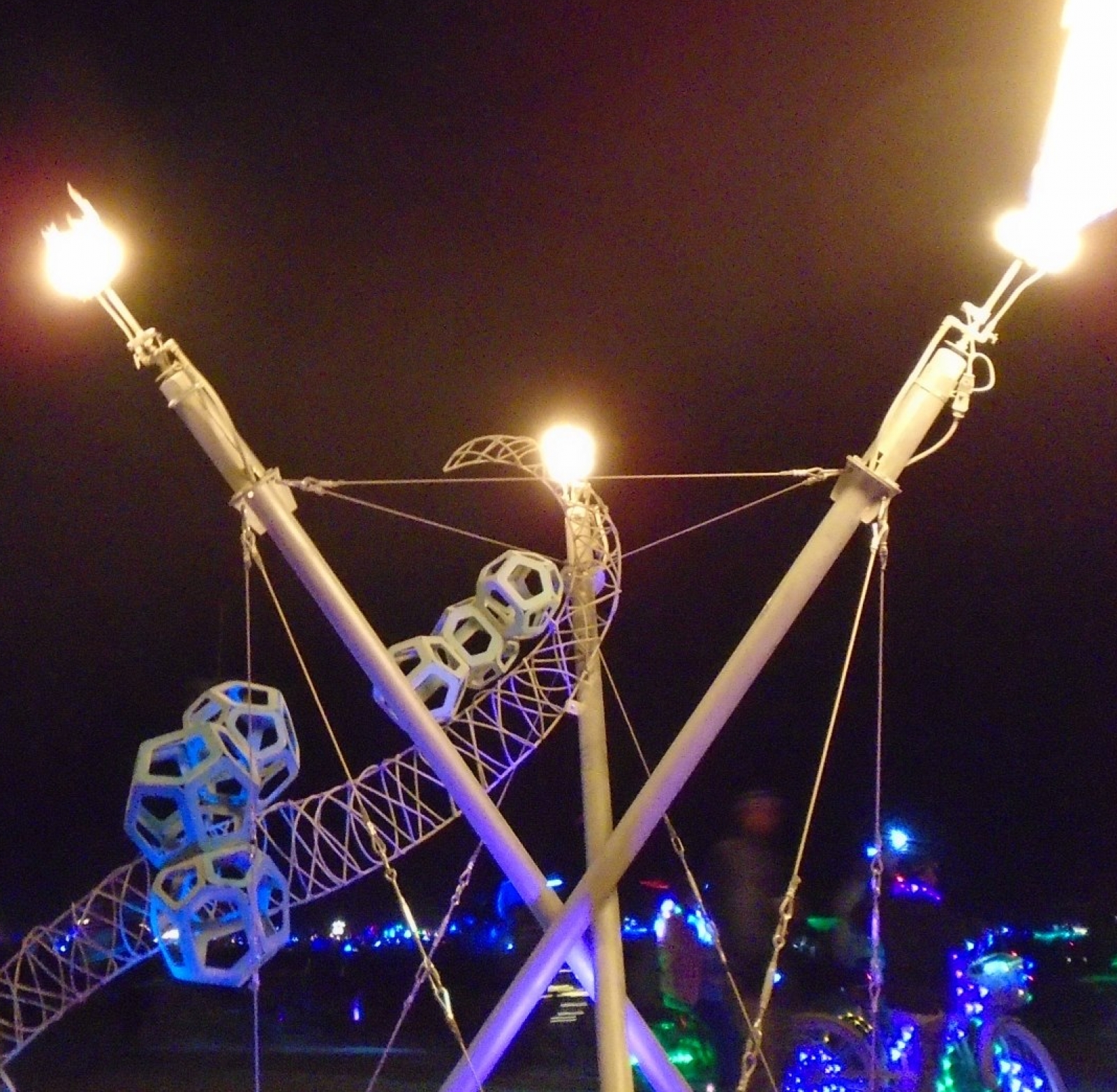 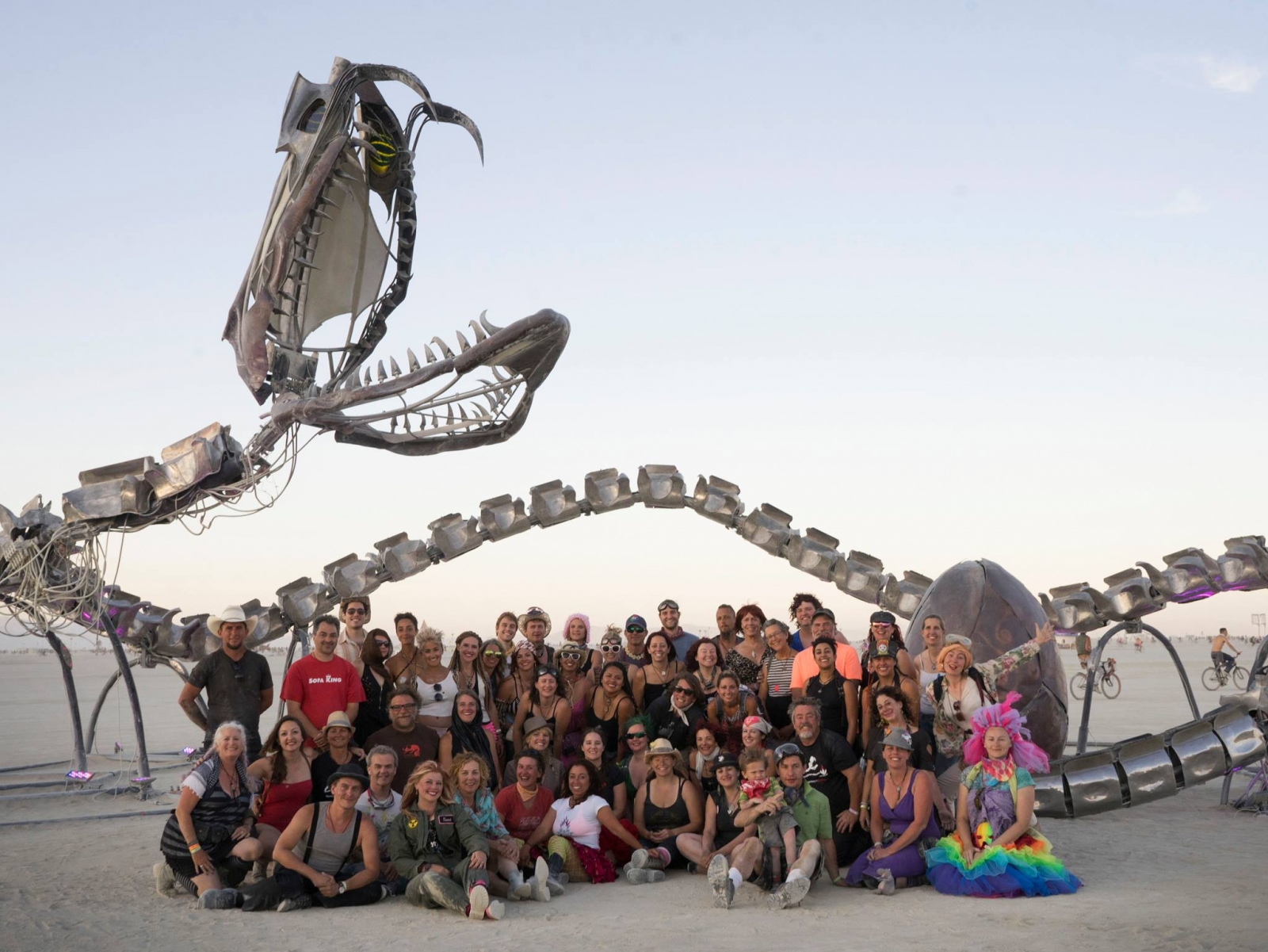