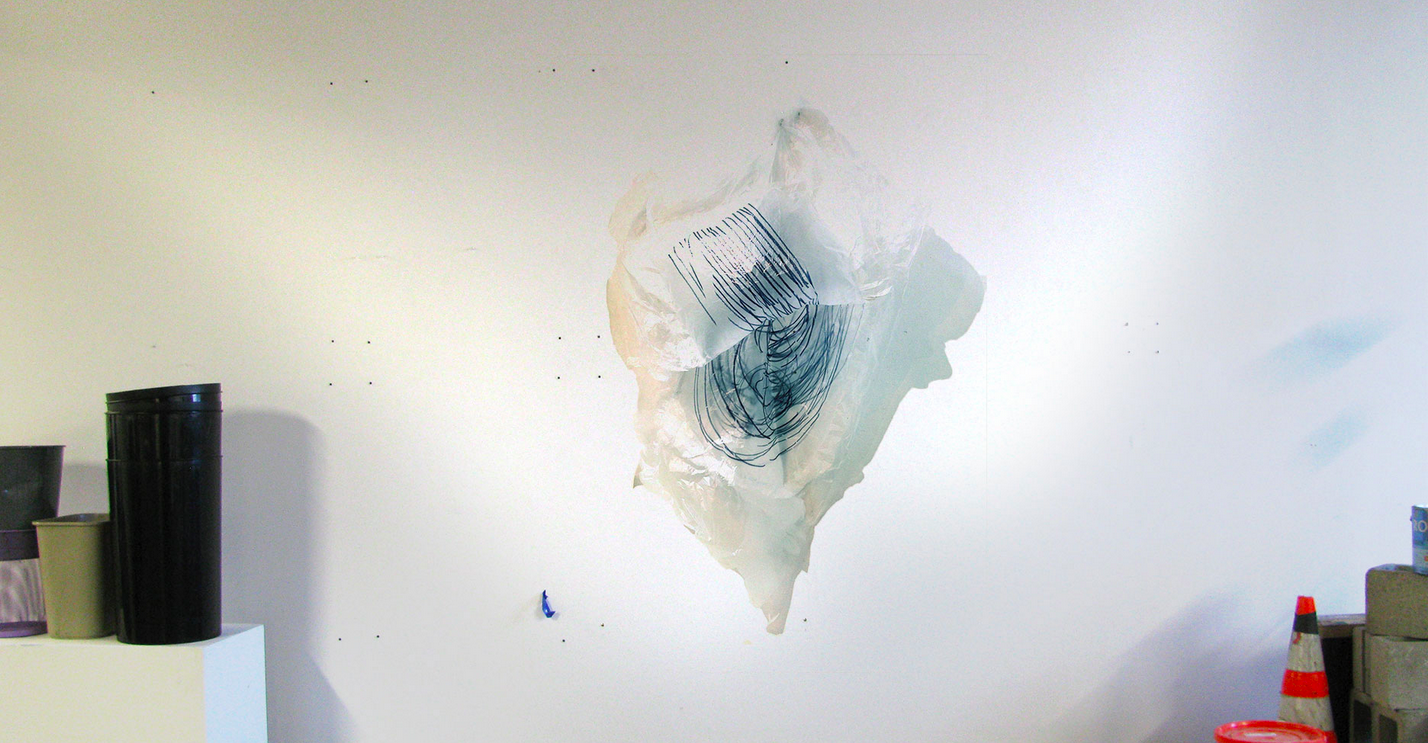 Joshua Highter: “I came from people who always made stuff.”

Joshua Highter makes his own paint.

“When you go to the store,” he says, “they already have pre-made fillers in the paint. So there’s a predetermined way how the paint will feel and handle.” By making his own—and refining his own linseed oil—Joshua can concoct the right mixture so that it “feels really loose and fluid” if that’s what he needs or “will stiffen and have body” if that is required. Making his own, he says, gives him more control over how he applies it.

That’s important because a Josh Highter canvas is apt to have a combination of textures. Highter’s abstracts hover on the edge of figurative composition. The shapes and colors often have origins in the physical world, often suggest a landscape stretched or shattered or imploded. But, like most paintings, they are also depictions of the process by which they were created. And that process has changed over the years.

“I grew up in Vermont where I was a free range kid,” he says. “I was really attracted to that type of landscape—mountainous woods.” At the beginning of his career he would take his easel into the woods and paint what he saw. When he left New England to get a Masters degree at Indiana University, Josh wondered, “Where did the landscape go?”

“I started compositing stuff into the studio… So that started my path towards working abstractly—bringing information into the studio versus going out.” 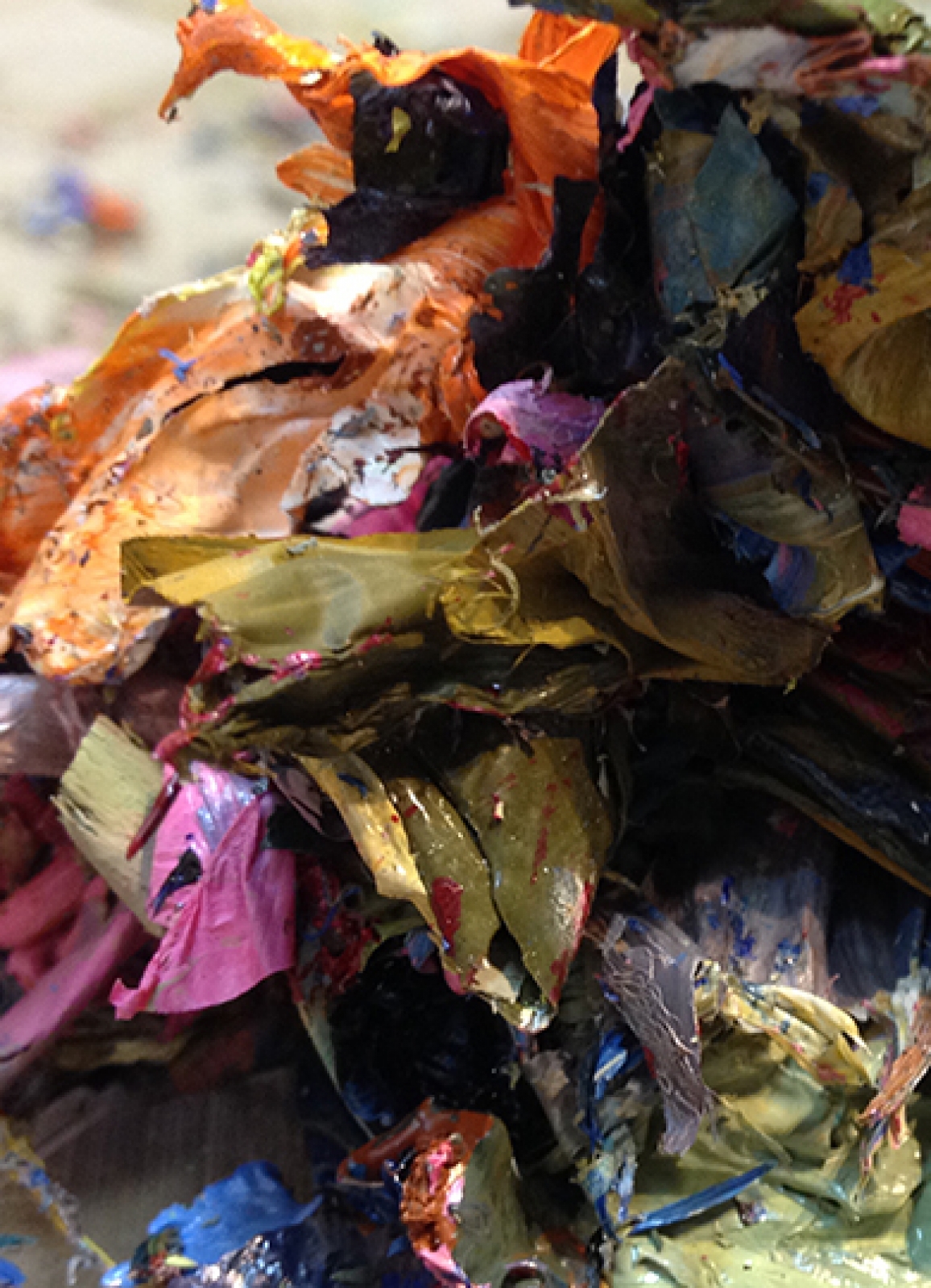 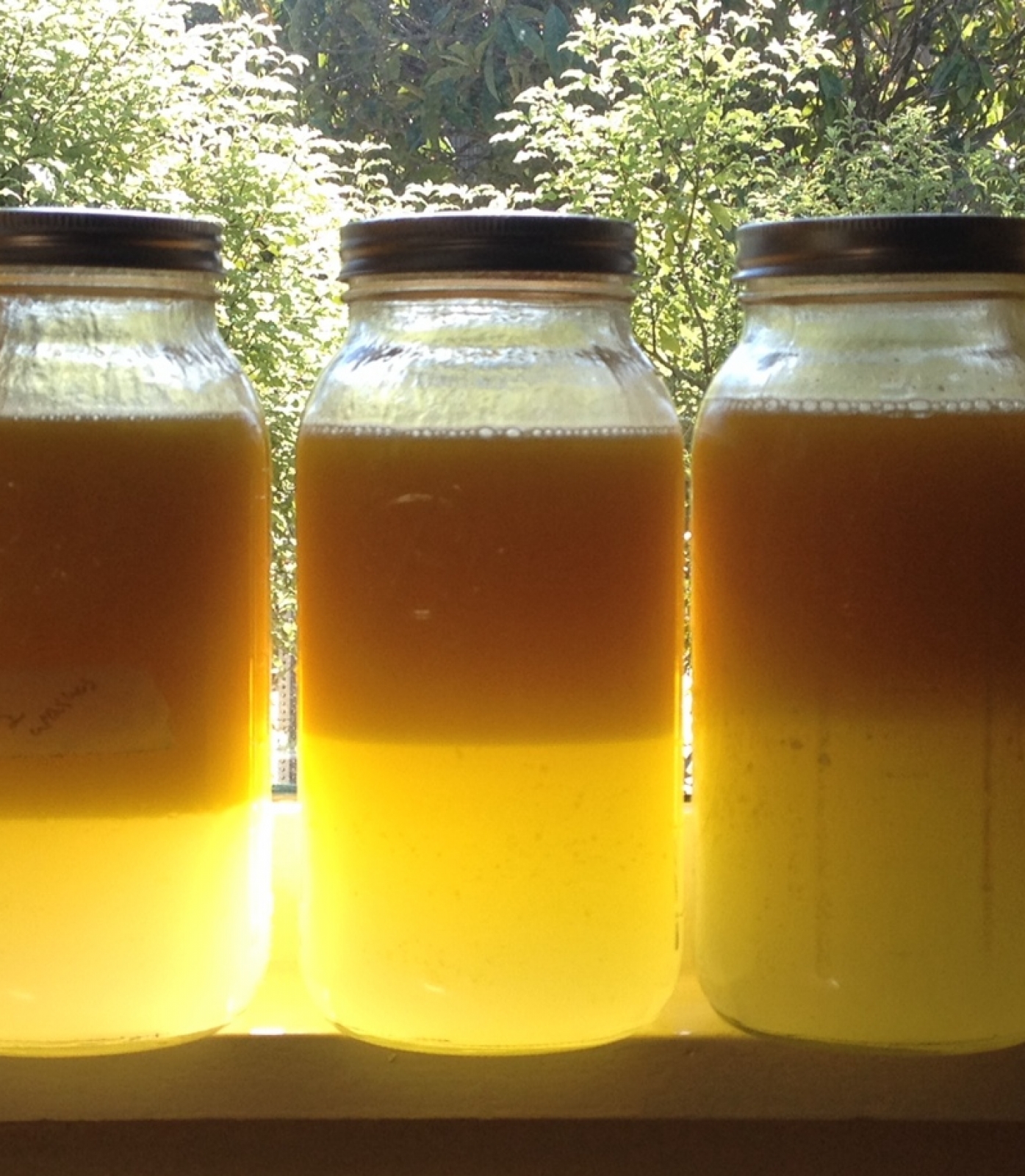 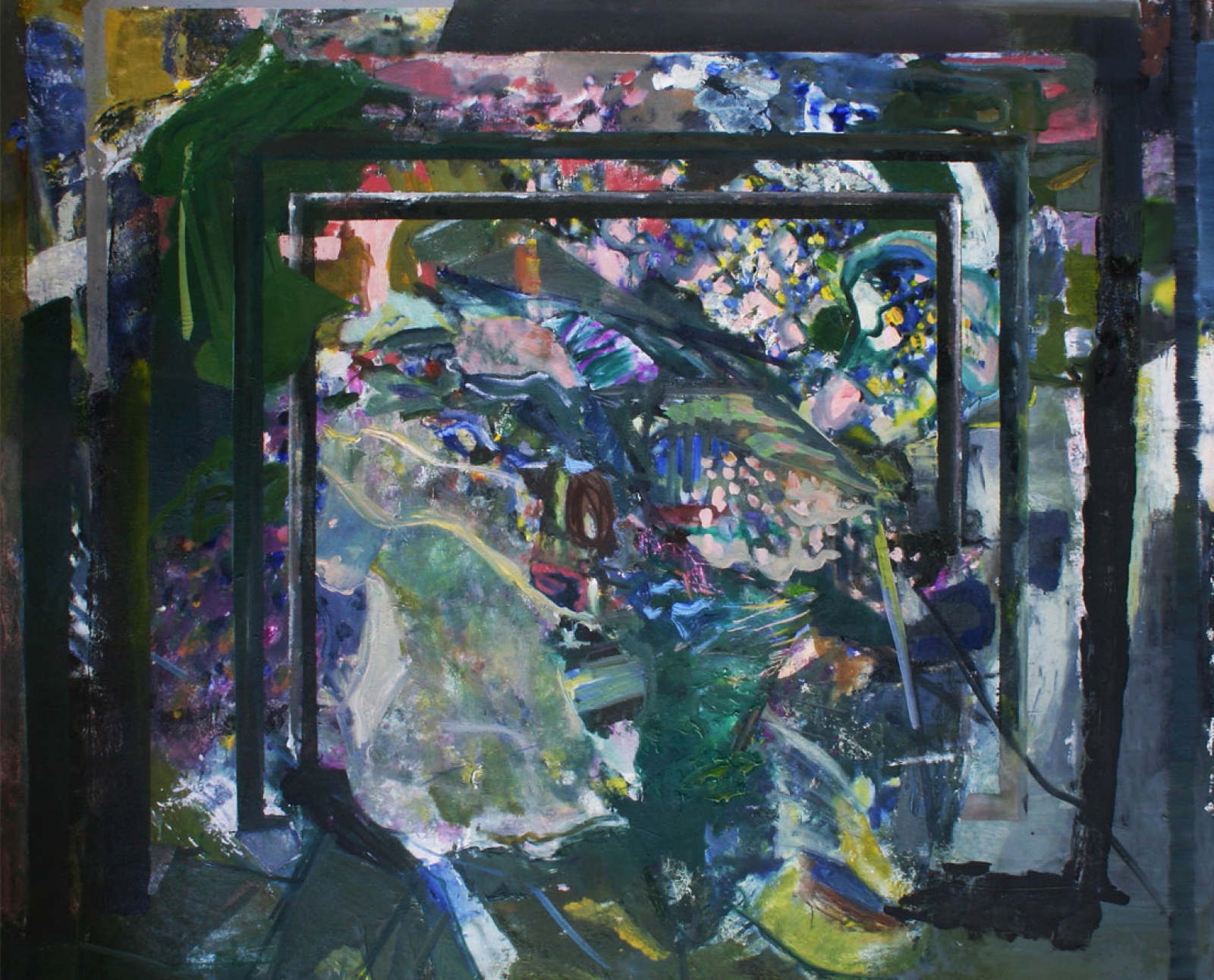 “I’ll set up some visual cues to ground a painting or give an entry point, but then a lot of times I’ll take it away in another part of the painting. It becomes a type of game, a fun painting game.” 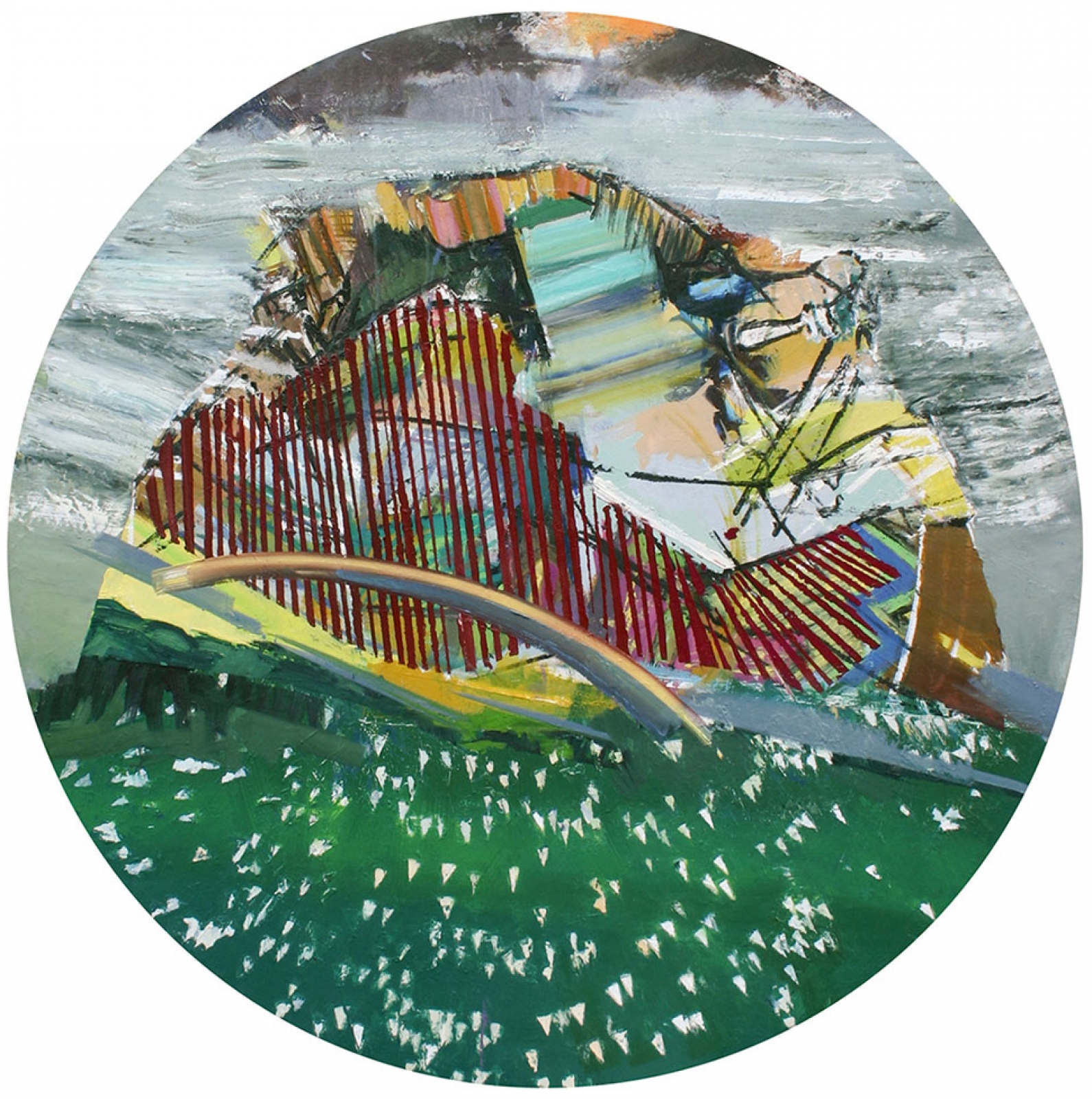 Coming after gigs as a freelance designer in Vermont—his portfolio includes ad campaigns for Sugarbush Ski Resort, theatre posters for Vermont Stage Company and marketing icons for Merchants Bank—the move to abstract art was not as great a leap as it might at first appear. Like his commercial work, Josh’s painting conducts a transaction with its audience. “I think it’s engaging for the viewer to sort of work to see what’s going on,” he says. “I’ll set up some visual cues to ground a painting or give an entry point, but then a lot of times I’ll take it away in another part of the painting. It becomes a type of game, a fun painting game.”

If Indiana nudged Josh into abstract painting, it also gave him an appreciation for community in the life of an artist. “Painting is a solitary event,” he says. “You have to leave that and converse with other people.” When he and his wife moved from Indianapolis to the Bay Area so she could take a job as a researcher at UCSF, Josh went looking for the kind of art community he enjoyed back East. Root Division offered it: a close-knit group of artists, exhibition space, even a studio. “It had everything bundled up so it seemed a good fit.”

Two and half years later, Josh’s community includes his fellow artists at Root Division, his students at UC Davis where he teaches drawing and painting and the galleries and exhibition venues around California, the Midwest and New England where his work has appeared. It’s a satisfyingly hand-made life.

“My parents were craft people,” Josh says. “My dad’s a cabinet builder. My mom’s a seamstress and clothing designer. My sister is a potter. I came from people who always made stuff and did things with their hands.” That’s a history that rhymes with Josh’s conviction that a painting gets “built”—layer by layer, image by image. With different thicknesses of paint… Which he makes himself…