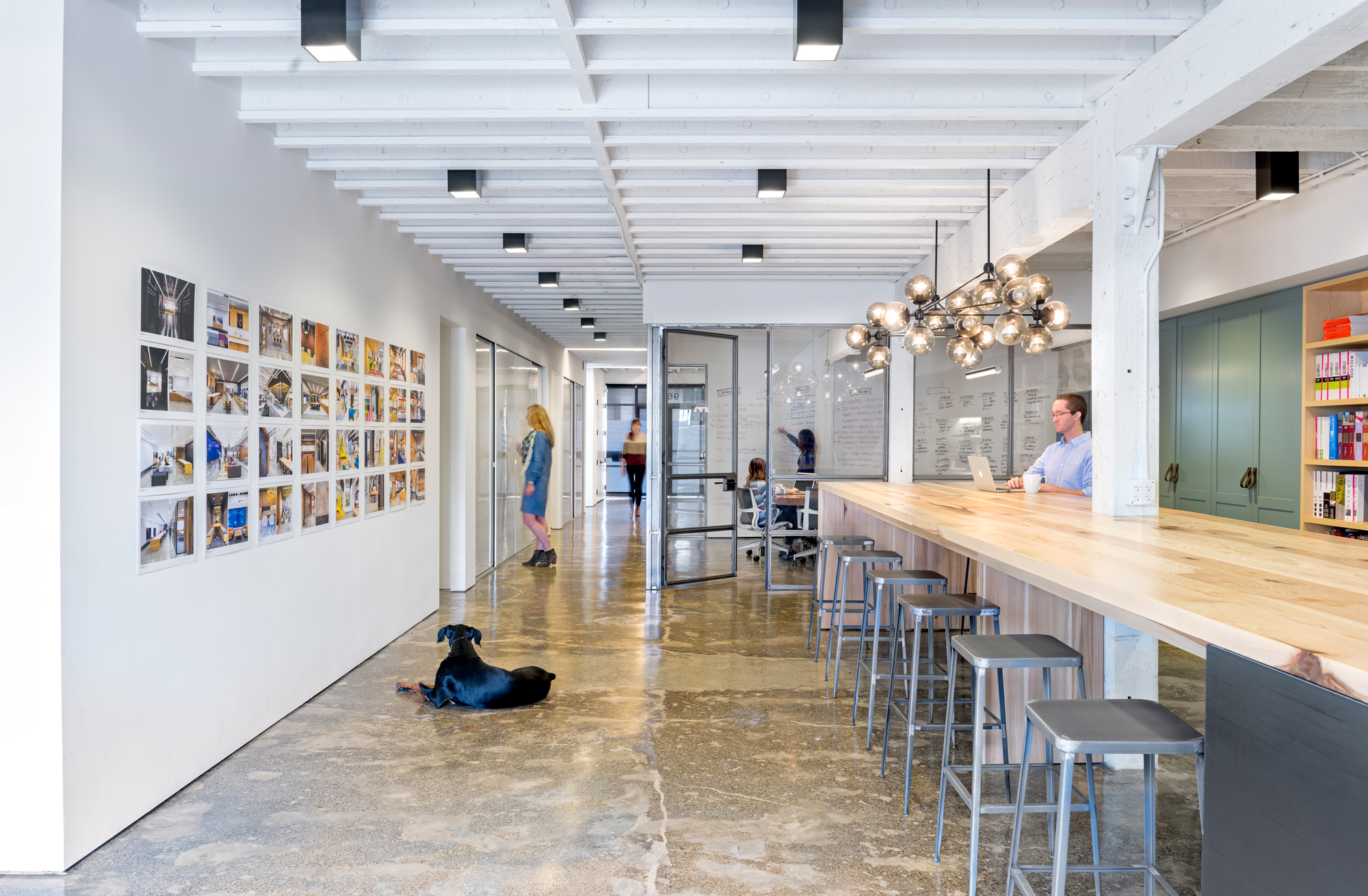 In the spring of 2014 Denise Cherry brought the staff of O+A across Howard Street to preview a work in progress. With none of the drywall in and piles of demolition debris still on site, the company’s designers poked through spaces that would soon become their new workplace. Denise showed the team where the kitchen would go, what the plans were for conference rooms, where the skylights would be cut. Upstairs the people who would soon be working there got a look at the view they would have through arching windows—a view of their old office! The new place was still a mess, but as professionals they could see the possibilities.

Not long after that tour, a structural engineer informed Denise and Senior Project Manager Neil Bartley that the upstairs floor on which all of O+A had been standing was structurally unsound—held up essentially by nothing but nails. Prior occupants of the space had come to work each day to a disaster waiting to happen. Ripping that floor out and replacing it with one that could withstand an earthquake (or an all-hands meeting), threw a wrench into the budget—it may have cost O+A an outside deck—but it resulted in a space that has put the company on firmer footing in more than just the literal sense.

452 Tehama is the first space O+A has designed for itself. Prior O+A offices (in Fremont and in San Francisco on 5th Street and on Howard) tended to be ad hoc environments, purely functional spaces (and sometimes not so functional) improvised from the materials at hand. The Tehama Street office is different. It’s the sort of office O+A designs for its clients—which is to say, an office that tells O+A’s story. 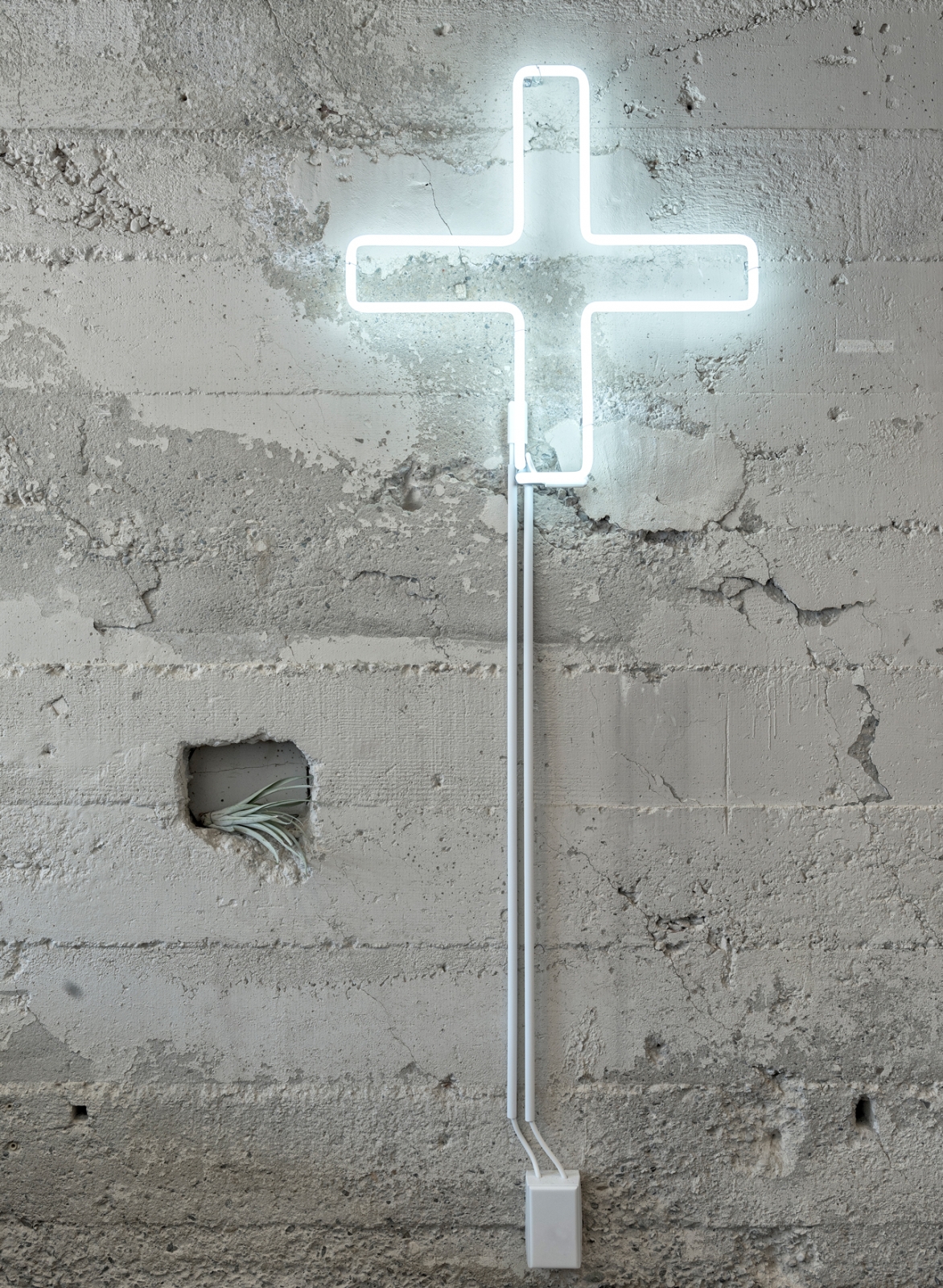 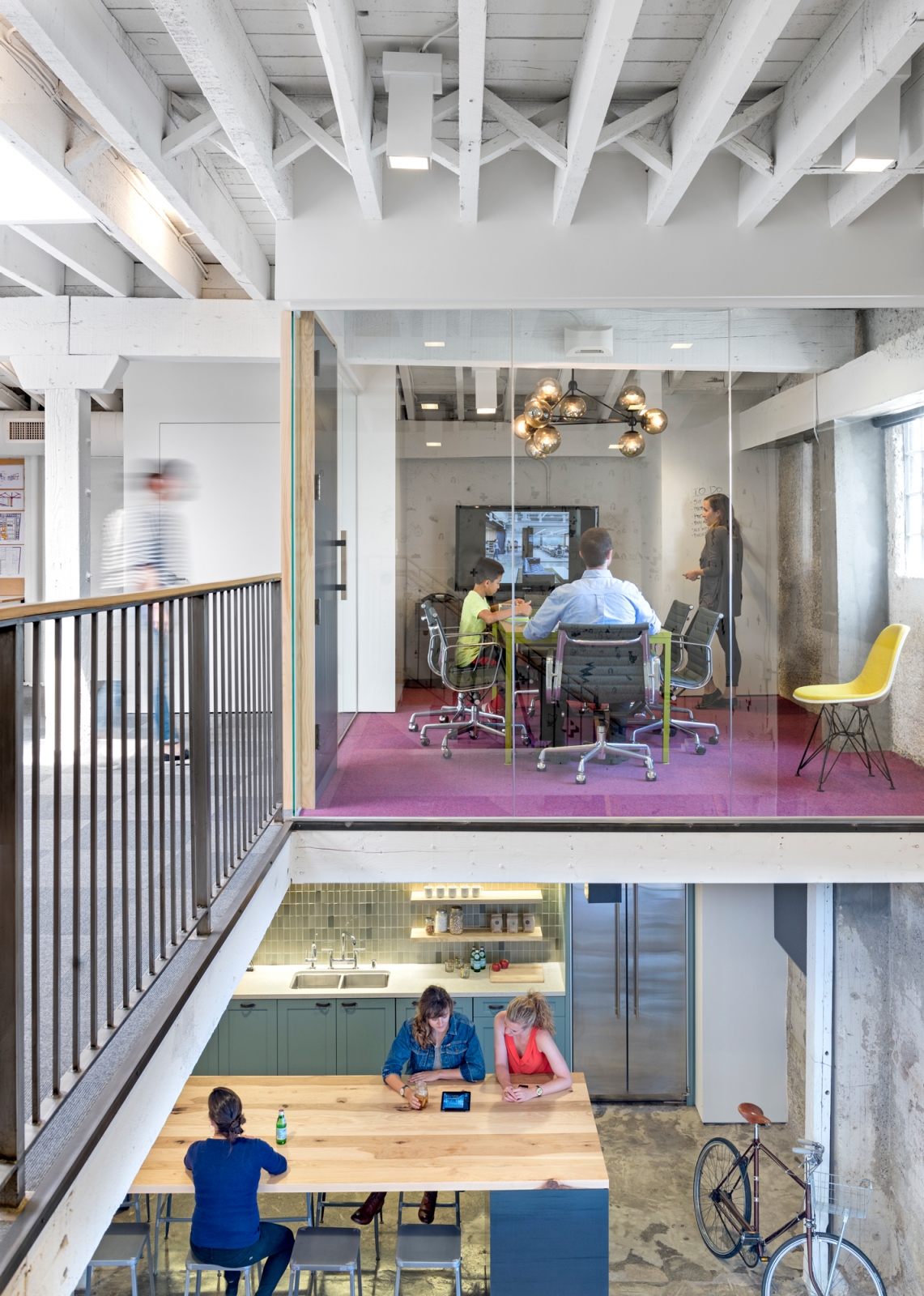 “It’s a demonstration of the power of design to change the way people work,” Neil Bartley says.

That power has always been key to O+A’s approach. Every O+A project begins with the assumption that a well-designed environment enhances the creativity and productivity of its users. Denise saw 452 Tehama as an opportunity to re-think the firm’s dynamics.

For example, designers are often hoarders. In the old space project materials and drawings frequently ended up on a single designer’s desk with piles of stuff on top of them. Access for other members of the team was strictly on a happened-to-find-it basis. The new office shrunk individual desk size so there would be less room for hoarding and established shared studio spaces where all of the materials for a project could be centrally stored. The result: access for all—and paradoxically, in some cases, more elbow room at smaller workstations.

O+A’s Tehama Street office is full of such exercises in physical space altering behavior. When in May of 2014 O+A’s staff crossed Howard Street for the last time and returned to a Tehama office with drywall up and floors in place it was the beginning of a season of “practice what we preach.”

A 22-foot standing-height table, modern appliances and a large screen TV make the kitchen a natural place for all hands meetings and communal lunches. It’s also a change of scene for wandering laptops. 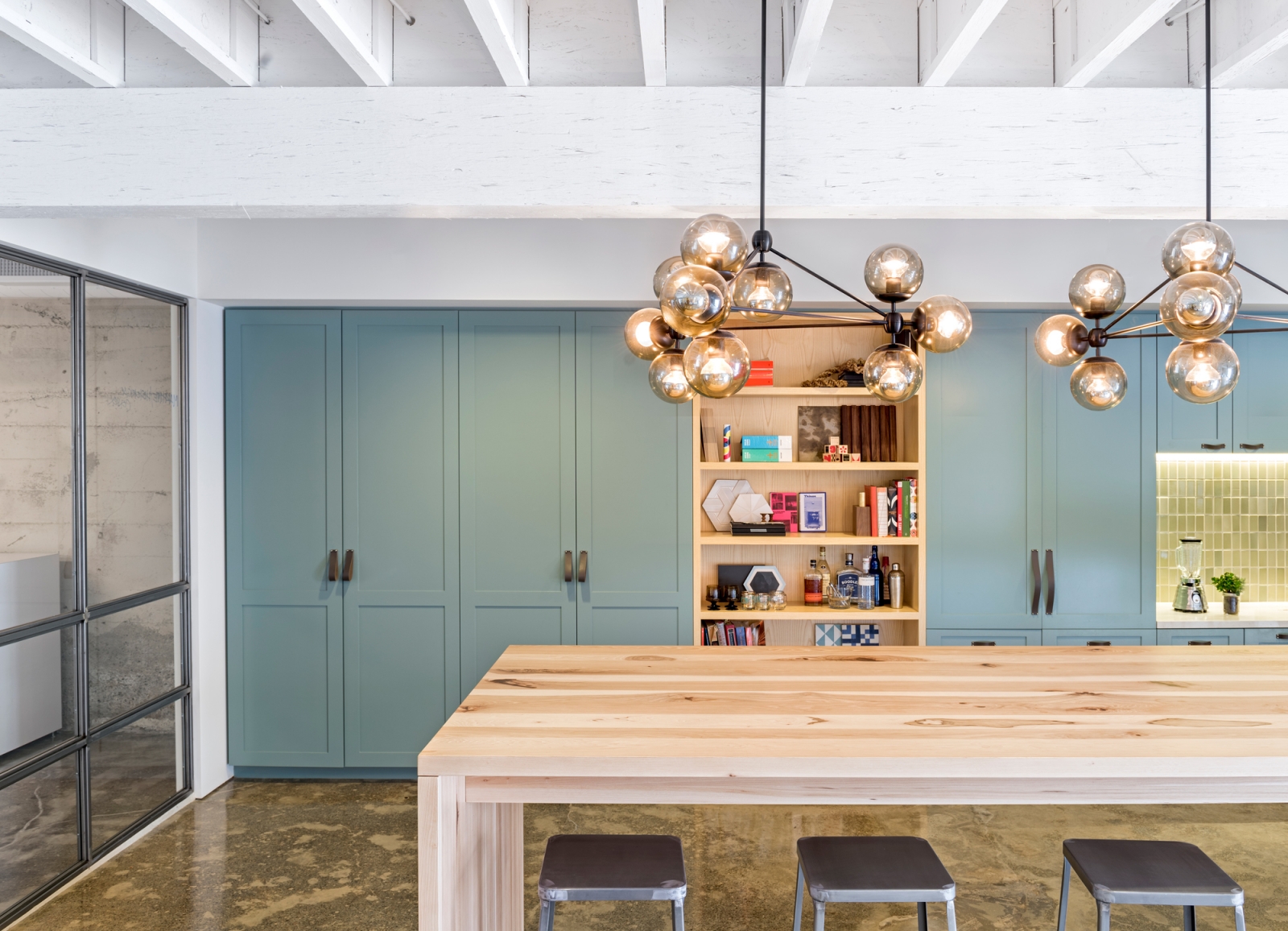 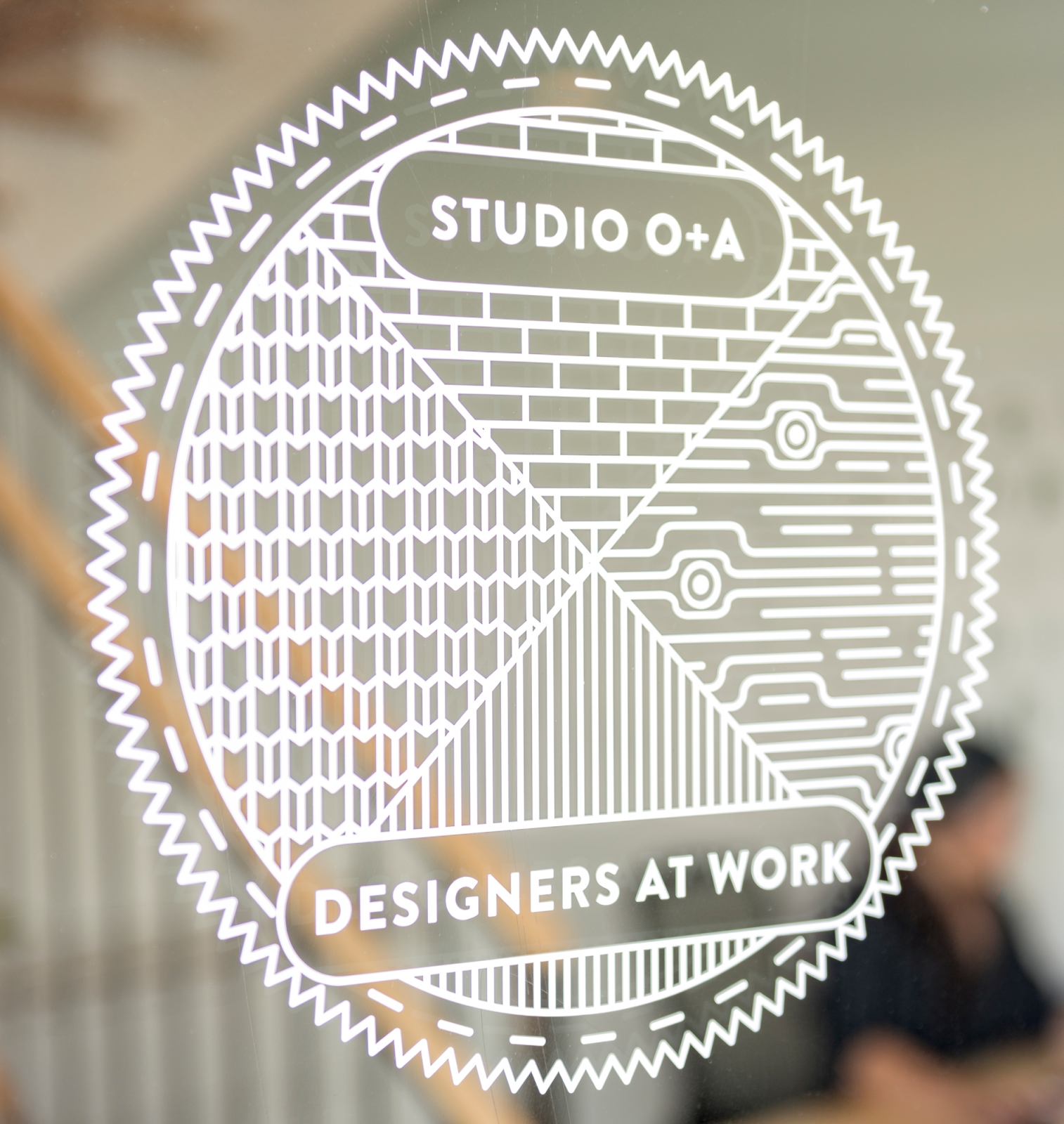 Then: Each desk an attic
Now: Shared studio space

Worktables for studio-style collaborations provide room to unroll a plan before rolling it out, as well as storage space for materials by project. These tables have been known to host occasional gin and tonics. 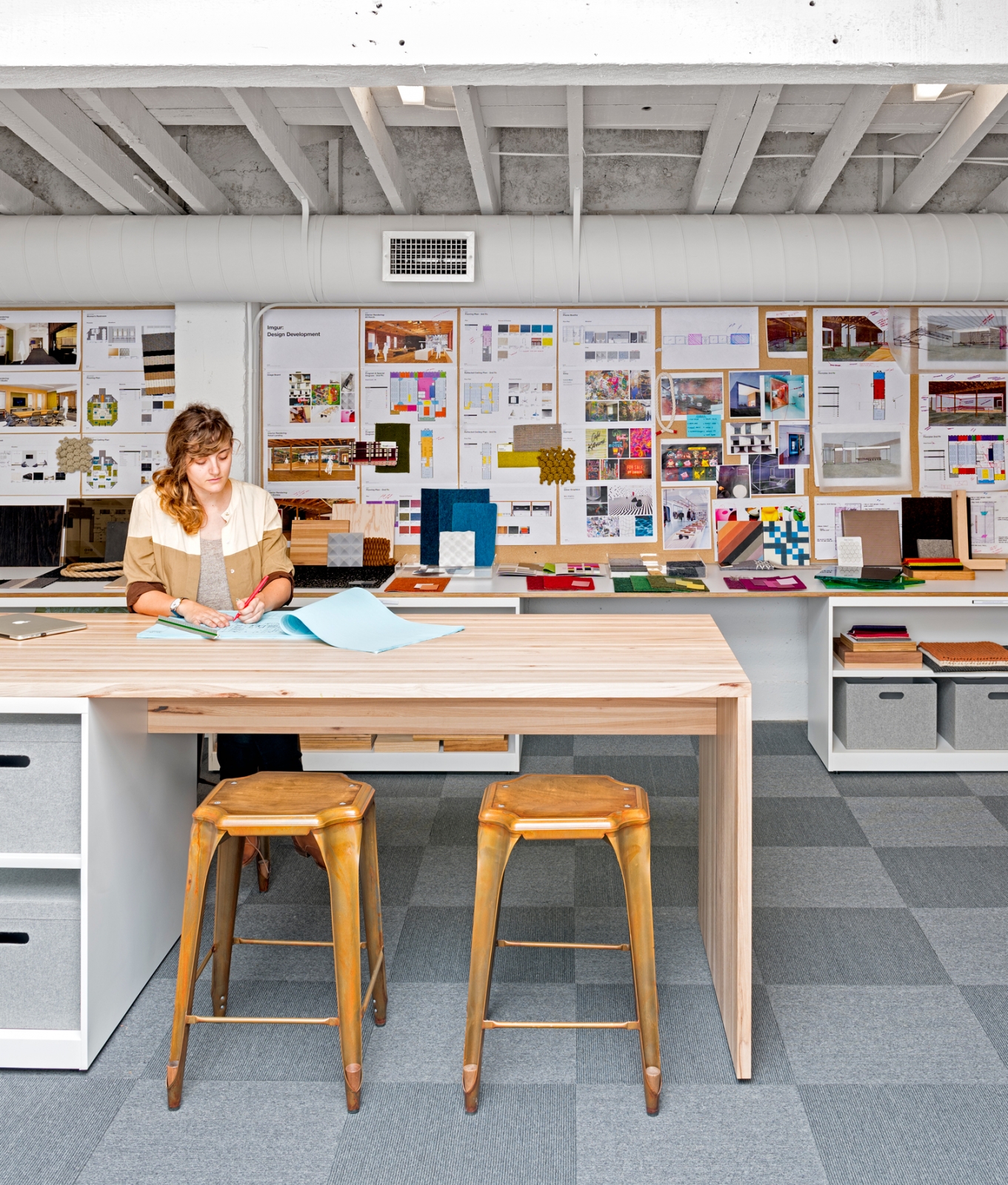 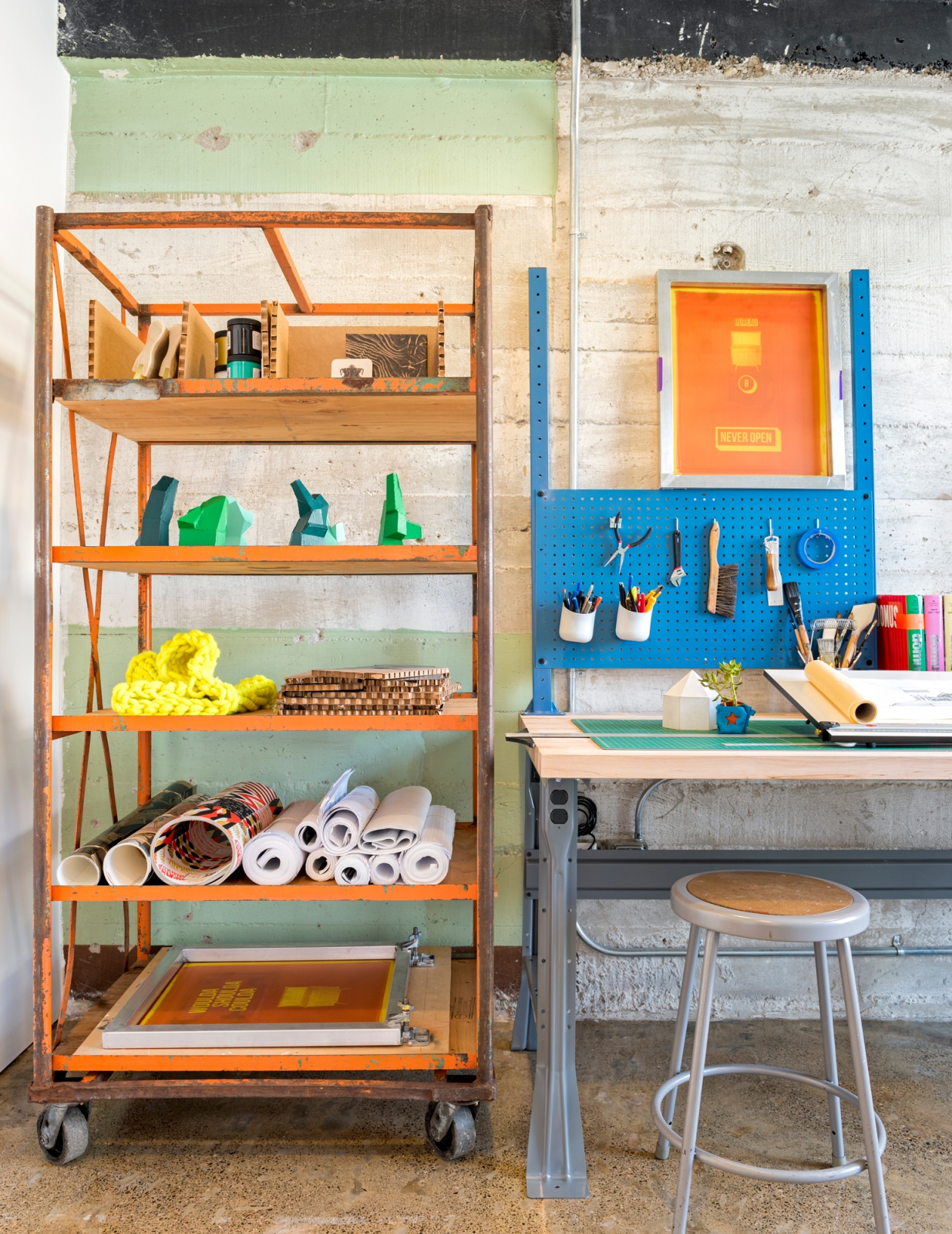 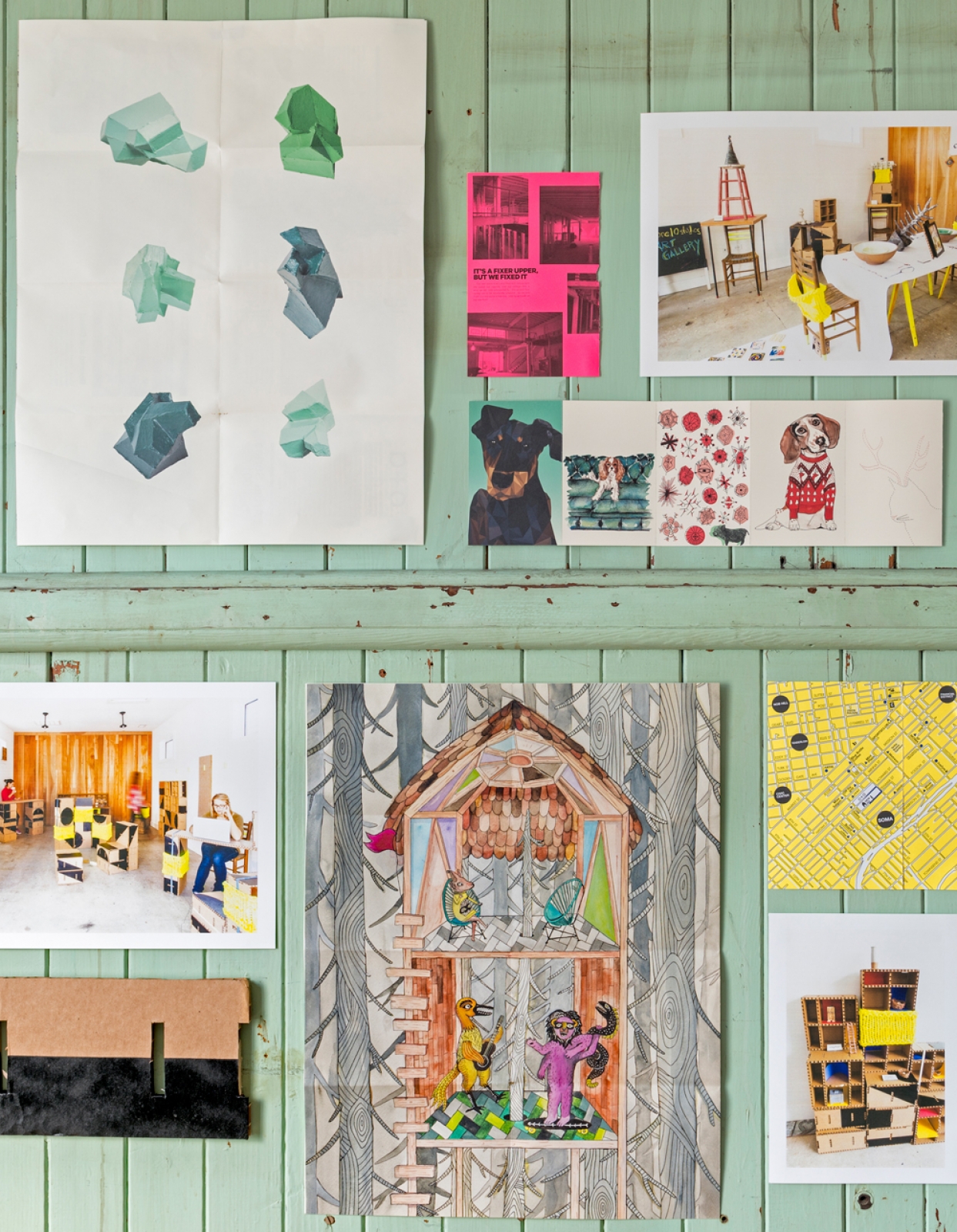 Then: Glue spray on the sidewalk outside
Now: Workshop space for art and crafts

A bench with tools and cutting mattes has so far been used to produce sketches, watercolors, sculpture and photos, but it’s a sturdy-enough space to accommodate heavier work. The ladder in the corner awaits an assignment.

Then: Live where you sit
Now: Don’t get too comfortable

Six month rotation seating means no one gets too settled in. Shared bench workstations with each individual granted __ inches of surface makes every call a conference call—or take it outside! 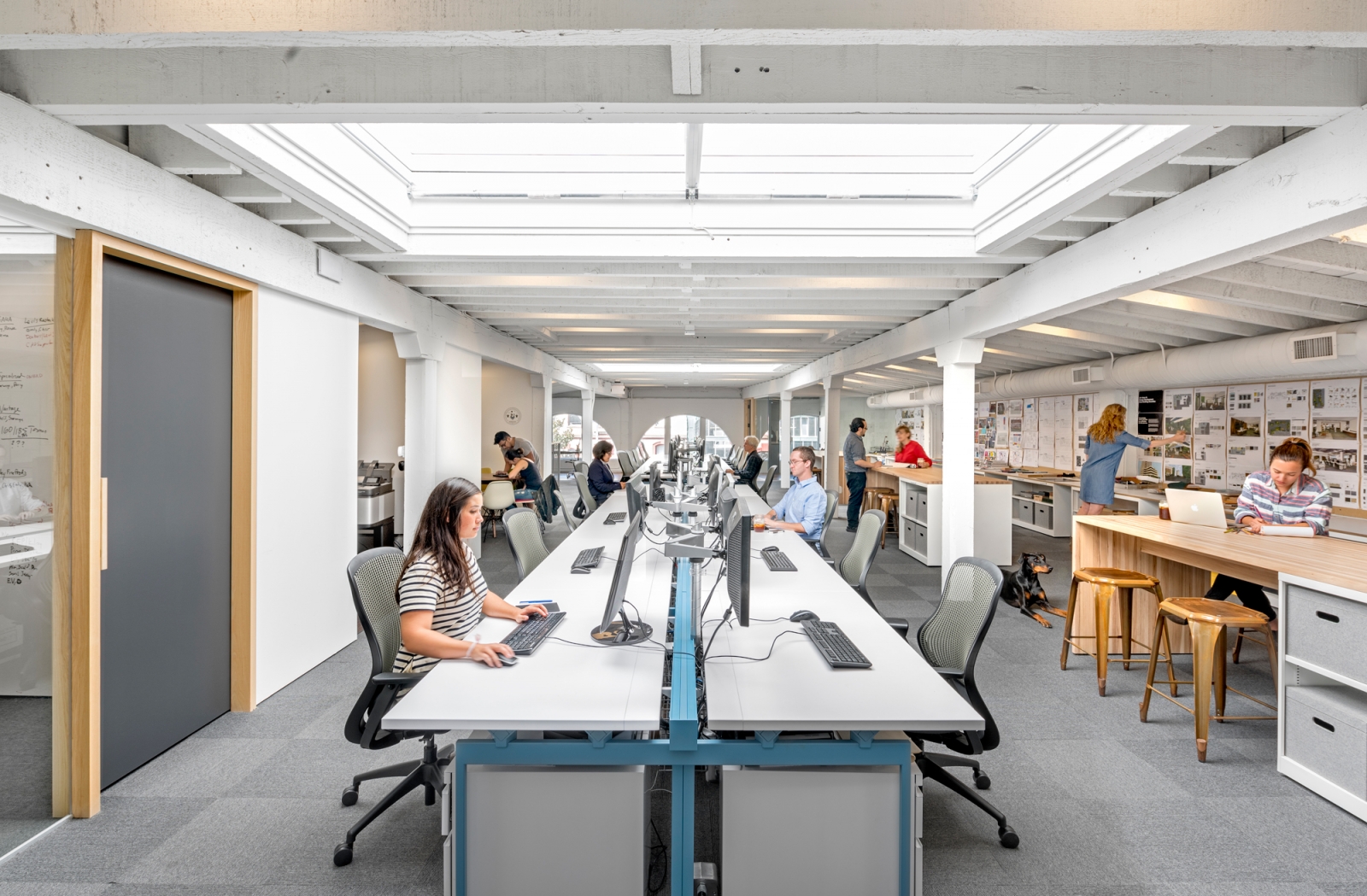 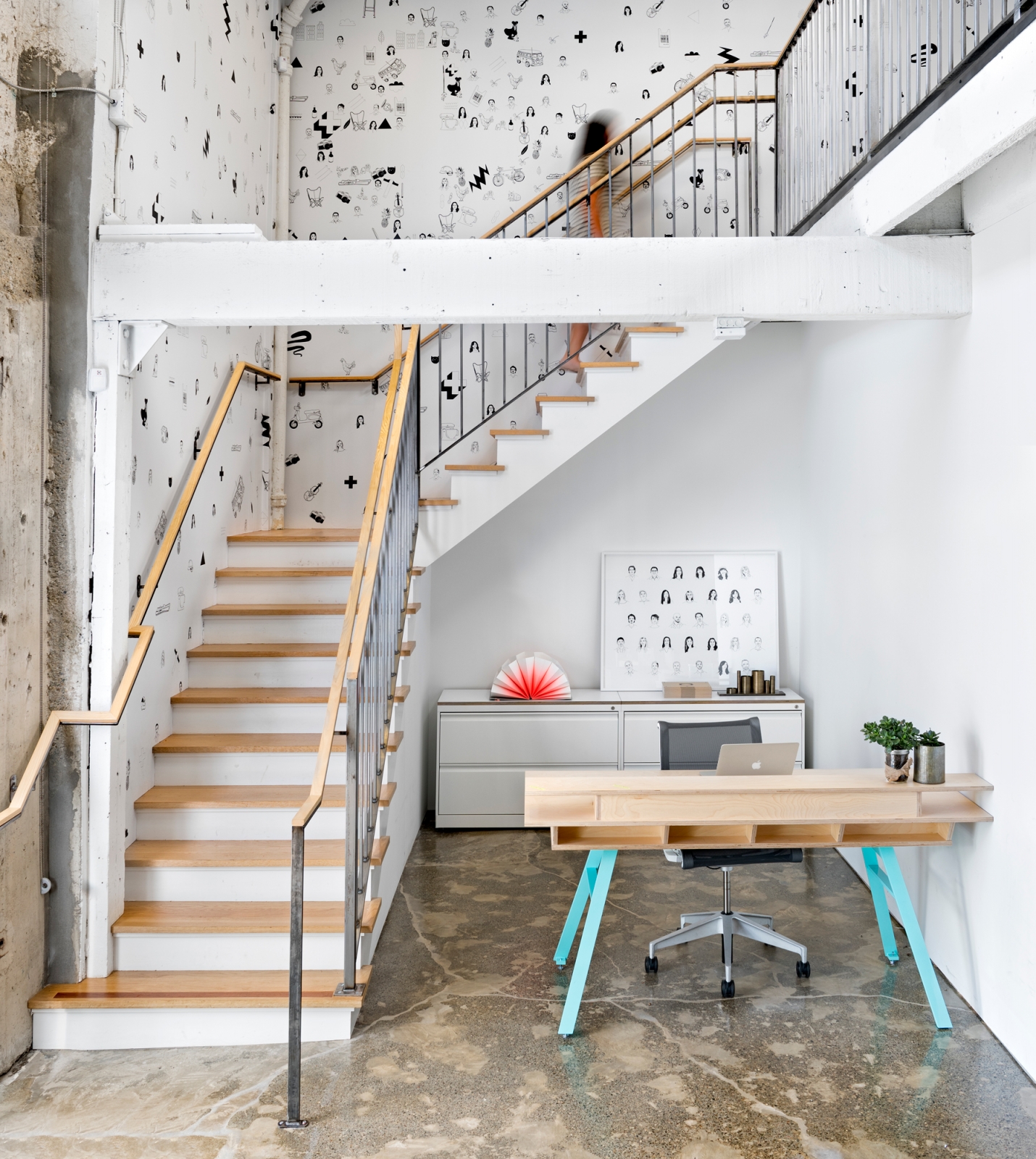 Skylights on the second floor and floor-to-ceiling windows below bring the season into the office. For those working upstairs a rainstorm is an overhead concert.