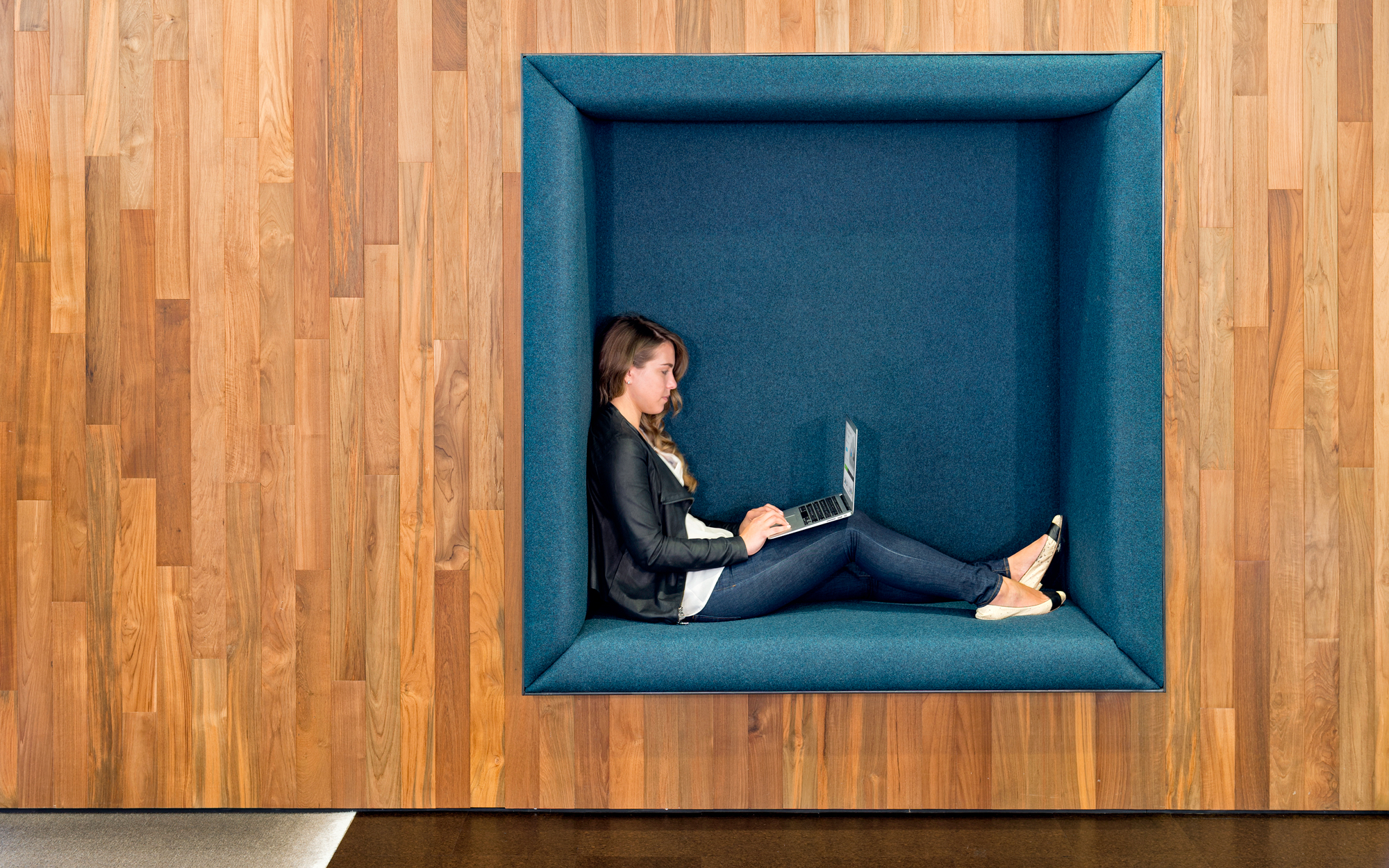 Well-Being in the Workplace

“Whatever your mood is during the day, the company better have that option for you.” Primo Orpilla, Studio O+A

To be happy at work is a modern concept.
The idea that a company’s management would spend time and money making its employees happy would have appalled Frederick Winslow Taylor, the early 20th century efficiency expert who calculated the precise number of movements necessary to shovel a load of coal and urged managers to “enforce” the technique.  It would have appalled Harry Bennett the union-busting executive at Ford Motor Company, whose security goons in 1937 beat UAW representatives with clubs while the chief of police looked on.  It probably would have appalled even Johnny Paycheck, the country music singer, whose 1977 hit “Take This Job and Shove It” turned dissatisfaction at work into a cultural anthem.

We live in kinder times.

“I think the well-being of the employee is now more closely looked at,” says O+A co-founder Primo Orpilla. “Because, it’s not just about collecting a paycheck.  It’s not just about having the right ergonomic setup.  It’s about ‘How is my mood during the day?  How am I feeling in this space?  Are they taking care of me?’”

That was the theme behind an IIDA Industry Roundtable Primo attended in Chicago at the beginning of the year.  With companies pitching their work environments as recruiting tools, interior design professionals must make those environments not just functional, but comfortable—and not just comfortable, but alluring.  The idea is redefining what “well-being” means in a work context:  not only a chair that’s good for your back or finish selections that don’t harm the environment.  The new well-being is nothing short of personal fulfillment.  It’s happiness—and a new generation of IIDA heavyweights believes it can be designed. 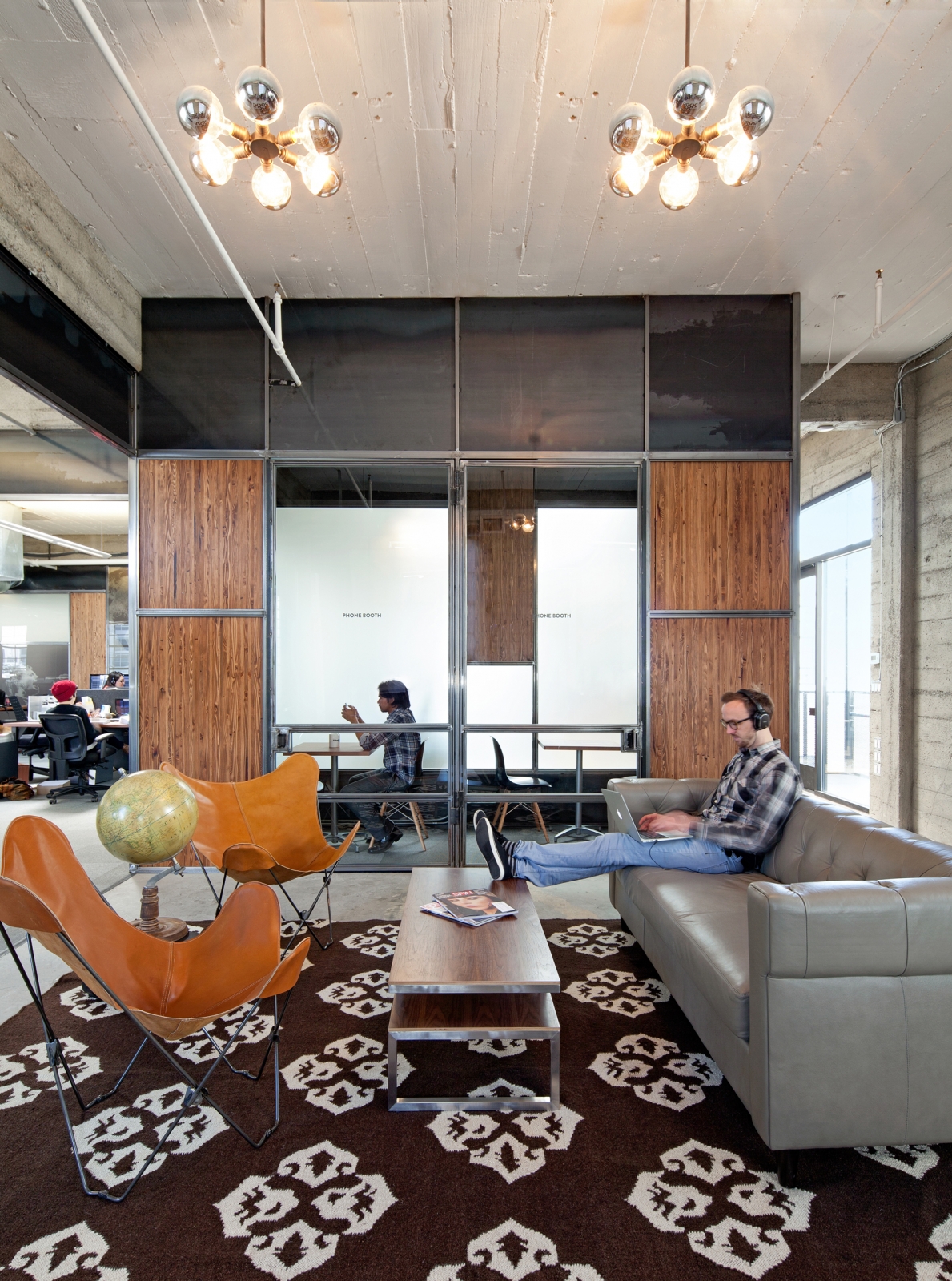 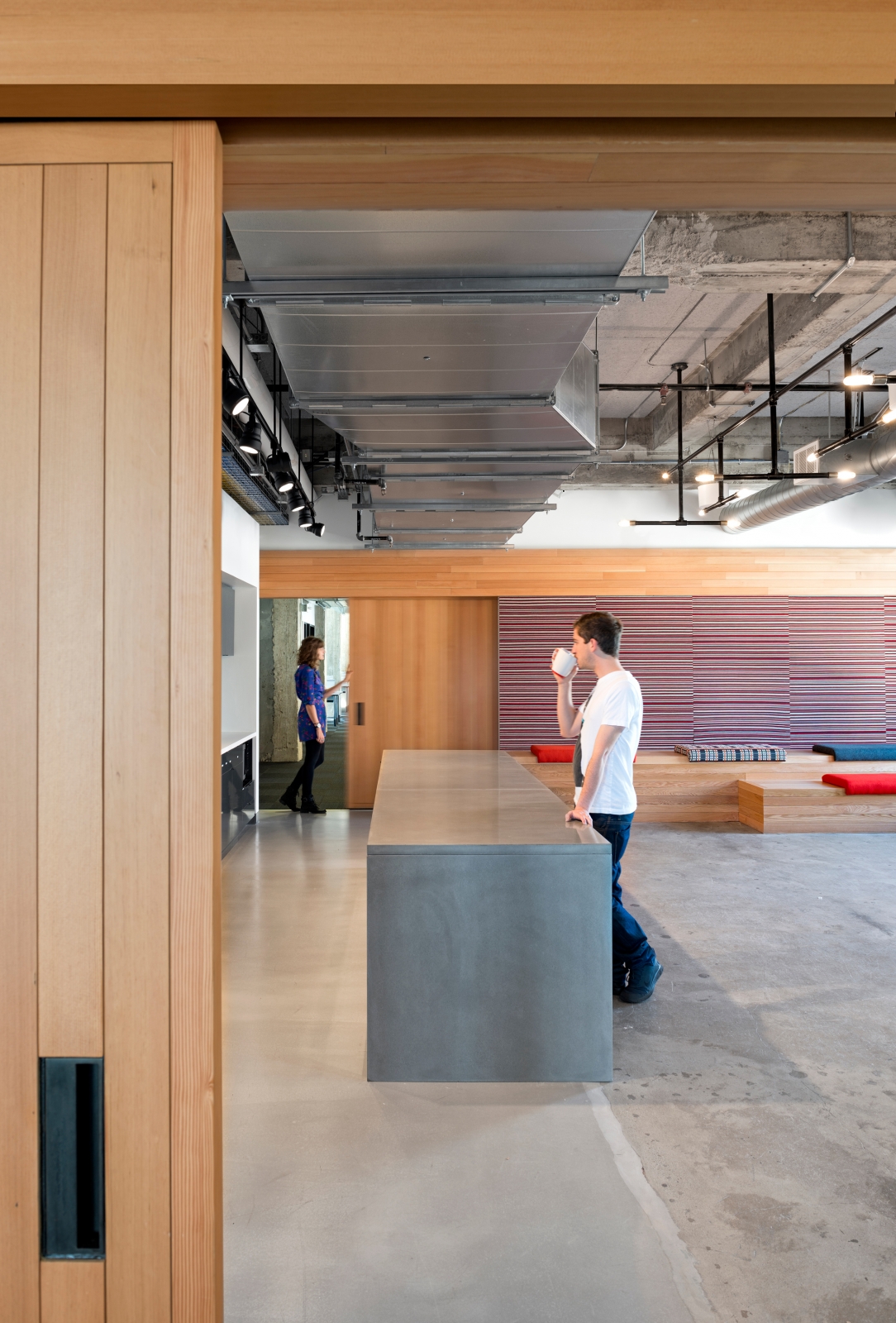 For O+A well-being is the logical outgrowth of everything the company has been doing for almost 25 years.  Right from the start Primo and Verda built an extra measure of user satisfaction into their design development process.  “I think it’s a natural progression for O+A,” Primo says.  “We realized the importance of workplace early on.  We’ve always thought these experiences could be a lot better.  This cafeteria could be better than a cafeteria.  Why can’t it be like my favorite restaurant?  This lounge could be better.  It could feel like a hotel lobby.  Comfort, yes—but also familiarity is, to me, a big part of walking into an environment.  Coffee shop.  Restaurant.  Exhibition kitchen.  Very cool, nurturing spaces.  Nooks and crannies.”

When, a few years ago, the limitations of Open Plan became clear, O+A began to assess how a workplace could balance an open collaborative environment with the need to do private work.  The deeper the company drilled into that question the more it recognized all the other balances a workplace might strike—the balance between work and leisure, between indoors and outdoors, between creative inspiration and the necessary grind, even between standing up and sitting down.

“It’s not just about having the right ergonomic setup.  It’s about ‘How is my mood during the day?  How am I feeling in this space?  Are they taking care of me?’” 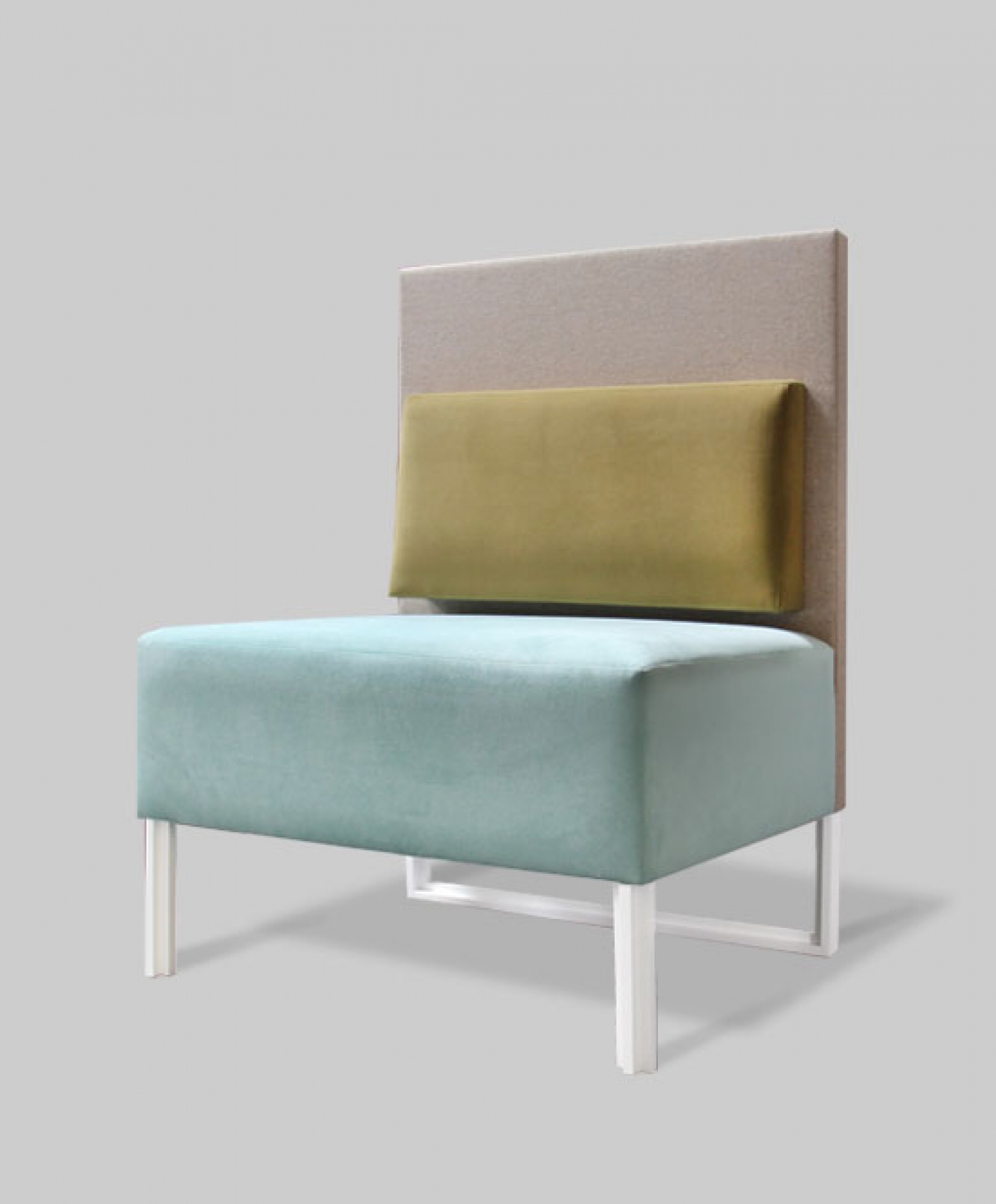 One consequence of diving deep into workplace well-being is Primo’s new focus on designing furniture for manufacturers. Starting in 2012 with The Edge, (a modular ensemble that included, among its other components an option to lie down) Primo has directed much of his design expertise to creating furniture through his company, Shop 70, that enhances the well-being of the user.  Both Canopy, the product he designed for Kimball Office and Assembli, his new piece for Martin Brattrud, have at their heart the idea of adaptability.

“It’s like when a bird builds a nest,” he says, “ and it pulls in whatever branches it needs to build its environment.  Humans do the same thing.  We’ve seen it time and again, these engineers will do their areas over again simply because they want to.  And they’re engineers and they’re smart and they figure, oh I can do this.  So let’s give them the ability in the furniture to do it—to be able to pull it apart, roll it together, add accessories to create enclosure or create openness or softness or sit-to-stand.”

Sit-to-stand is of particular interest:  “Especially when I’m designing,” Primo says, “I find that I can concentrate more when I’m standing up at a table…  It just feels a little bit more like I’m on top of it.  I’m in a better position to think.  Ernest Hemingway wrote standing up.  And, yeah okay, Benjamin Franklin wrote in his bathtub.  So we all have different postures that kind of help us do what we do.”

Helping people do what they do is the new consensus in workplace design—across the industry and especially at O+A.  If it doesn’t help you do your job better, if it doesn’t give you options, if it doesn’t make shoveling your load of coal a happier task… in these kinder times it will not be built. 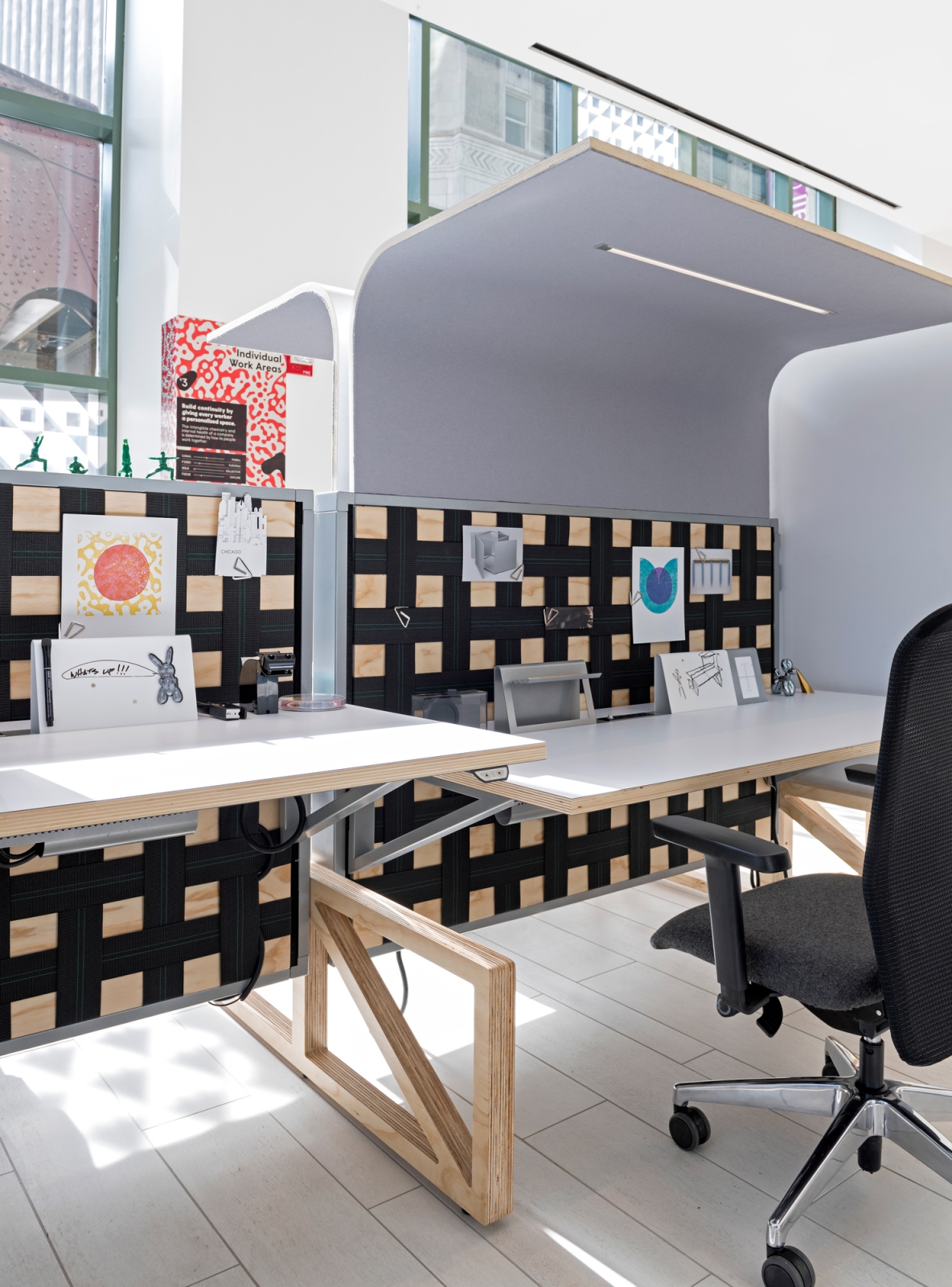